With 'If Found...'s reveal let's talk about all the amazing people working on it.

No games is made by an individual. Even a game with one person in the credits is building on the tools, the know how, the culture and the influence, of those who came before. And that's wonderful!

Liadh Young is our illustrator and artist -> this game and dreamfeel as a studio wouldn't exist without her. If Found... was originally started by Llaura and Liadh and Liadh's fingerprint is, literally, all over it. I'm so sincerely grateful to work with her! Tim is our incredible coder. By the time you've finished describing a feature, he's already implemented it. As reliable and capable as he is nice (incredibly).

Tim Sabo is our incredible coder. By the time you've finished describing a feature, he's already implemented it. As reliable and capable as he is nice (incredibly).

Bri Chew only joined a few months ago and already they've had an enormous impact. They do art, visual design and game design and literally a bit of everything. They truly completed the team, filling in so many gaps we didn't know we had.

Eve Golden-Woods helped at the beginning of the project in 2016 and came back as a co-writer since January 2019 and soon will be helping Llaura with production too. The game only exists as it is now because of her, and she has helped put order and sense on the wild wild script!!

Alexandra Day has been the quiet and reliable backbone since late 2018. As well as being our tester extraordinaire she does all the little fussy things around the office and helps Llaura day to day so we can spend more time on the actual game.

and Llaura Ash McGee (no twitter right now) is our director, level designer, producer, and co-writer. What she does is only possible because of everyone else's work and she's incredibly grateful to be surrounded by such nice people. <3

We've been joined by 2 Mello is one of the nicest people in video games. Even when he only had a single video game credit many moons ago, I could tell he had such an ear for melody and music. When we worked together for a short time in 2016 I knew I wanted to again asap

And Eli Rainsberry, who is the absolute professional and pours love and attention to detail into everything they do. I love their work in No Longer Home, and recently additional amazing games. Not only doing sound design for us but also amazing music for the notebook sections.

Additionally many other people have helped in small and big ways and the game wouldn't exist without them either. It's sometimes easy to forget all the people that create a game, and the least someone can do is credit. So I hope you look forward to an amazing credits sequence!

All of these people I hope to work with well into the future. If Found... is just our very first game, there are many many more to come. :D

We also wanted to share some of the impressions coming out about the trailer and demo from PAX. Thank you to anyone who covered the announcement or had kind words to say about our demo. Here's a short selection: 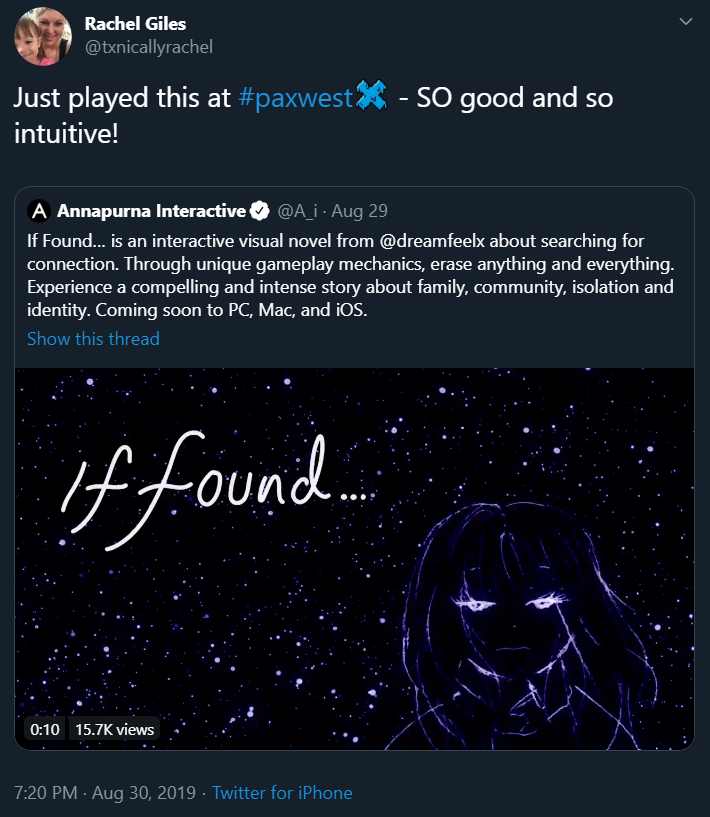 That's all for now but we'll be back soon with more updates on the game and what we've been up to!

Go home, come out, erase everything.