A downloadable game for Windows, macOS, and Linux

CURTAIN is an interactive first-person narrative about Kaci & Ally, two queer women in a Glasgow punk band, which gives you a first hand experience of their destructive relationship.

Players embody Ally coming home to their apartment after a successful gig as Kaci, your partner, watches and comments on every thought and action, creating an overwhelming, stifling atmosphere

It takes about half an hour to finish, the game will exit itself.

(cw: this is a game about abuse. nothing is explicitly shown, it's all done through conversation, but it can be intense)

If you can't afford a copy ping me and I'll give you a key.

//Update 4th of Jan 2022 - The Mac build doesn't seem to be working with the latest versions of MacOS. Hopefully this can be fixed in the future.

Please feel free to contact me with any thoughts or feedback! :3
dreamfeelx at gmail

QUOTES:
"Curtain is less a cautionary tale and more a cathartic exploration of a terrible, complex situation. It's real-life horror, with a "monster" that's infinitely more complicated and human than anything in fiction... dreamfeeel's observations are so dead-on that they broke my heart". - Danielle Riendeau, Polygon

"You know this is going to happen from the start... The trash of adolescence is all around and your relationship is just as grim". - Chris Priestman, KillScreen

"what counts the most, is that if you don't go through all the dramatic hardships, the game will keep on running forever." - Luca Colosso, creepygaming.net

"Curtain is, above all, an exploration of abusive relationships.. the frailty with which we attempt to block out just the parts of people we don't like, until they are too lurid to obscure." - Chloi Rad, IndieGames.com

Check us out on fb here: http://facebook.com/dreamfeelx
And sign up for newsletter here.

This game explores themes and concepts with a nuance that very little media is capable to, which is why I appreciate it so much. Specially in the terms of the family, which we see a lot of polarizing depictions in media, either being fully against or fully supportive of their queer kids. Overall it hit a bit too close to home, but I think that's what makes it great! It is able to show a facet of the young adult experience that many go through, given it be abusive relationships, distant families, friends growing apart or financial insecurity. I'm just happy this game exists, as, again, very few are able to be this genuine and raw with their art.

I can't get this game to install via the itch launcher- it doesn't let me select a package and throws a build error when I click install.

This game rings true to life. Thank you for making it.

A razor sharp observation on troubled relationships that gave me no where to hide.

Me cried, me sad

Oh my god, this was incredible... Exactly the kind of catharsis I needed. Thank you. <3

Grounded in humanity and has an important message. Just a magnificent little game!

I really enjoy it :D

I havent played this game yet but it seems that others like it , so i will enjoy it!

(plus i like pixel art games or is it-)

this was incredible. the ambience, the graphic, the script. the ending really... god, this gave me a lot of feelings. this was absolutely amazing and im glad i found it. thank you for your hardwork, thank you for sharing something so incredible and visceral.

I'm going to approach this from the point of view of someone who engages in analysis of video games as literature, which I do. So, from that perspective, FUUUUUUUUUCK. This was so upsetting. This was upsetting in a perfect way. Talk about a hostile atmosphere. I love the use of language as a low-level antagonist in itself, separating Kaci from her words as though she is some sort of boss, spewing these crushing blows. Curtain is heartbreaking, but it's also incredibly relatable. I hate the experience, and I loved how it worked out.

Loved this so much. 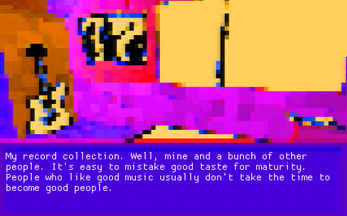 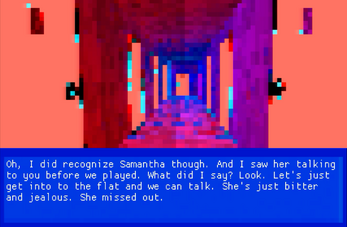